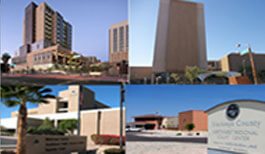 The Maricopa County Superior Court is where all Felony and secondary Misdemeanor and Civil Violations proceed through the system. If the primary charge is a Misdemeanor or a Civil Violation, those types of cases end up in City Courts, Town Courts, or Justice Courts.

There are four courthouses around Maricopa County that handle felony cases: two in downtown Phoenix, one in Mesa, and one in northern Phoenix.

The Preliminary Hearing stage is basically when a person is charged with a Felony offense, they are sometimes told to come to court, where they can meet with their attorney, and, potentially, negotiate a plea agreement or dismissal of the case prior to a judge determining whether the charges are appropriate to move forward towards trial.

The Grand Jury is comprised of a number of Arizona residents, who are on a months-long stint as members of the Grand Jury, and their job is to determine whether there is enough probable cause for a case to move forward towards trial.

A presentation to the grand jury is made by the prosecutor, with the assistance of law enforcement officers, but does not, in nearly all cases, include the defense lawyer or the Defendant themselves.

It is a one-sided presentation of the evidence, where the prosecutor has sole access to the Grand Jury, in an attempt to convince the Grand Jury that charges would be appropriate against the defendant.

The two court complexes in downtown Phoenix, the Central Court Building, the South Court Tower, and on rare occasion, the old Maricopa County Court House, is where Preliminary Hearings take place, as well as initial appearances after a grand jury comes back with an indictment (charging a defendant with crimes), and are the primary locations for jury trials on Felony (and secondary Misdemeanor and Civil Offense) cases.

The types of Felonies that occur in these court buildings include:

In Maricopa County, two judges are tasked with overseeing Aggravated DUI cases. Nearly all other cases are randomly assigned to other Superior Court judges.

Unfortunately, in most instances, a defendant charged with a Felony offense must show up to every court appearance, and an attorney is unable to appear on the client’s behalf.

If you, or someone you know, is charged with a criminal offense in University Lakes Justice Court, you want someone who focuses primarily on Criminal Defense Representation. Call the Arizona Criminal Law Team at 480-I-Have-Help (480-442-8343) for a Free ‘In-Depth’ Consultation.

Any information provided on these pages does not establish an Attorney / Client Relationship. All information on this website should be considered an OPINION based on experience, and may not be the most updated information based on constant changes in the field of law.